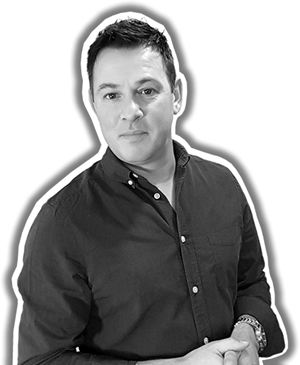 Digital marketing is all the rage, but it's often so overwhelming that business owners don't know where to start - or where to concentrate their efforts. Let's start from the beginning.

That’s what the press were saying in the early years of the internet. They thought it was going to be short-lived. And I believed them, too, even though I was already hooked by 1994.

And it was actually very techie too. When I first used the web around that time, you did have to be a bit of a geek to even get online. And when you did, it was so slow that you’d have to wait 10 seconds for a single thumbnail to load!

A 50-gig connection was just a pipedream to us.

Even though the internet has been my bread and butter for 25 years, I was late to the party. Before I got there, Tim Berners-Lee had already built the World Wide Web five years earlier in 1989.

That number is dwarfed by the amount of websites online today. There are - wait for it - one and a quarter BILLION websites now on the internet.

It’s amazing to think that the internet started with just 1 website in 1991. Believe it or not, that website is still online today.

It was created to provide people with general information about the world wide web itself. Here it is in action. I’ll add a link to it in the transcript below if you want to see it yourself - http://info.cern.ch/hypertext/WWW/TheProject.html

But back in 1994 I remember feeling a bit gutted that there were already about 10,000 websites by the time I joined the party. I had a lot of catching up to do.

Luckily, it was only a year after the world wide web became a public domain - and anyone was allowed to create their own websites.

Well, that decision was a pivotal point in human history. It meant that not only could people consume information instantly, they could also share information too.

And it all exploded. Today, more than half of the world’s population uses the internet. According to the latest figures, the internet has about 3.6 billion users.

That makes it the largest and quickest revolution ever seen by mankind.

Most of us are using the internet every day to check emails, read news, share our thoughts, watch videos, connect with family and friends and even use it to get a regular fix for whatever excites us.

It also gave rise to a new form of marketing - one that is considered the biggest change in the history of marketing itself: digital marketing. Bigger than the printing press? Maybe!

All of a sudden, businesses were able to connect with their target markets quickly, with very little cost involved. It transformed EVERYTHING.

At first, email and search advertising (thanks to the early years of Yahoo, Altavista and Hotbot), outbound marketing became the biggest channels for marketing.

These digital channels joined the ranks of the top traditional advertising channels such as TV, radio and print.

After the dot-com bubble burst in 2001, everyone said it was over for digital marketing.

But something quite extraordinary happened. We were introduced to Web2.0.

Rather than being a one way-communication channel, the internet evolved into a two-way conversation between people. The introduction of user-generated content saw new exciting opportunities, including forums, blogs, and every marketer’s favourite - social media.

Web2.0 was a way for marketers to join in - and sometimes disrupt - the conversation with brand messages, advertising, and consumer engagement.

And thanks to the invention of data-driven analytics, businesses had an instant way of measuring how effective their campaigns were running - in real time. No other medium in the history of marketing was able to do this.

Marketers everywhere were jumping up and down with delight. That is, until the invention of the smartphone - and the tablet.

These two devices cemented digital as a major tool in every marketers toolbox.

Smartphones exploded in popularity when they reached mass market in 2007. They changed everything - again, thanks to the launch of the iPhone.

But what does it all mean for the small business owner?

In a world where more than half of the world’s population are using the internet regularly, every business needs to be familiar with the fundamentals of digital marketing. Every business. There are virtually no exceptions.

If you want to reach your target market in a simple, cost effective, measurable way, then digital marketing is critical for small businesses.

So you really shouldn’t put all your eggs into the digital marketing basket.

But I advise you to get at least a basic understanding of the strategies and methods of using digital marketing to reach your target market. After all, with few exceptions, that’s where your future customers are hanging out.

And that’s because it’s important to use digital channels as part of your overall marketing strategy.

Your business needs to be modern and progressive, if you want to thrive in today’s world. You need to embrace digital as part of your marketing strategy, because it’s not going to go away.

Businesses are spending more and more each year on digital. In the UK, brands spent £7.3 billion pounds on digital marketing. That’s a massive amount of money dedicated to digital.

So, if you want to keep up with your competitors, then you need a solid foundation to work from.

I know it sounds like a lot to take in. But let’s not get carried away too quickly.

But sooner or later, every business owner needs to grab the digital bull by its horns, and get started.

You’re not going to win every time, trust me. But the more you try, the easier it becomes, and the more success you’ll find.

Take your time, tackle one element at a time, and get familiar with a single topic before diving into another.

Don’t be daunted. I’ve got more than two decades of experience in digital marketing, and I’m here to show you the ropes.

It’s a fun topic, and one that can be hugely successful for your business. So, welcome to the Digital Marketing section of The Rainmakers.

There's more inside The Rainmakers Club

Ready to double, triple or even quadruple your sales? Join the Rainmakers Club today and get access to hundreds more worksheets, ebooks, tutorials, guides, tools and downloads.

NEW FOR 2022! Join our growing club of successful small business owners and get The Raindeck free: a 3-deck strategy for brainstorming and running successful marketing campaigns.

Schedule a no-obligation call with The Rainmakers Club team, tell us about your business and your biggest problem. We'll give you our advice and honest feedback if membership would work for you.